Category design is a discipline that many of the world’s most successful companies in history have used to differentiate themselves, break through the noise, and transform their industry.

In this article, we’ll explore examples of 13 companies that have designed and dominated their own market categories.

While all our content is written for B2B founders, we’ve included some B2C examples because we are big believers that B2B companies can learn a lot from B2C brands. 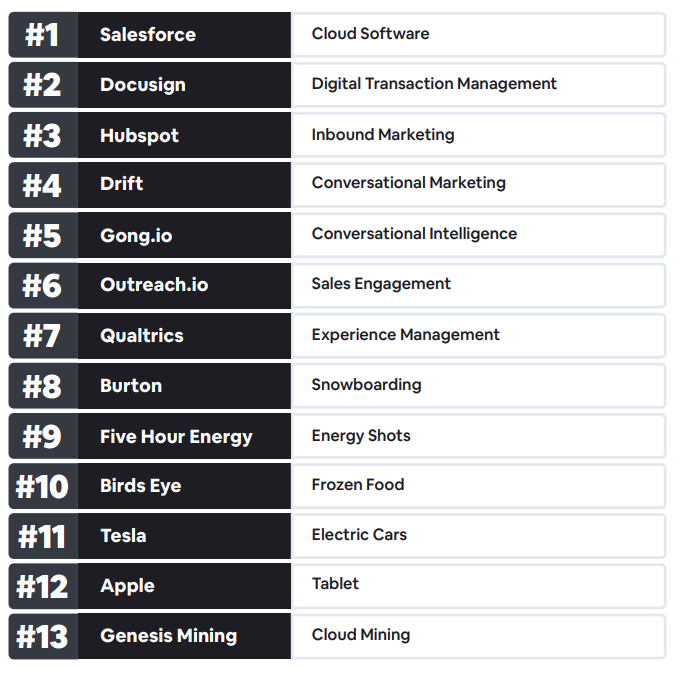 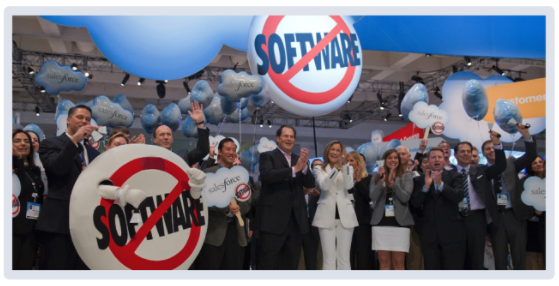 For nearly a decade, a company called Siebel systems had dominated the customer relationship management (CRM) market. Their software was expensive, complicated, and, most importantly, was installed on-premise. Salesforce went to market with a radically different way to provide CRM solutions. Instead of being on-premise, Salesforce would be delivered via the cloud — which, at the time, was a radical idea. Convincing IT leaders to trust all their data with a startup and reimagine how they used software was a major ask. Realizing this, from day one, Salesforce CEO Marc Benioff focused on evangelizing the benefits of cloud software and declared war on the idea of on-premise software. He was vocal about the problems on-premise software created for customers and advocated for the benefits of cloud software. As he conditioned the market to buy into his vision, Salesforce was perfectly positioned to be the market leader their customers turned to when they were ready to make the switch. 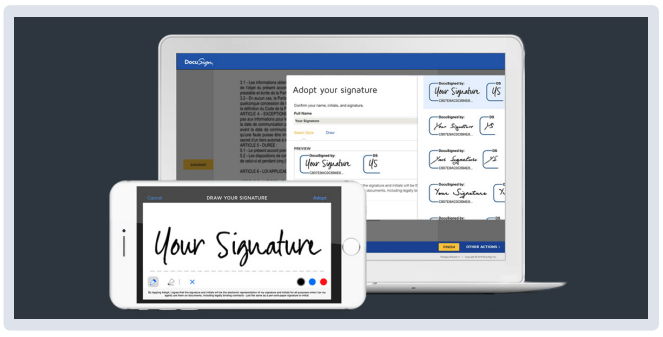 In 2000, the government passed the Electronic Signatures in Global and National Commerce Act. This ensured the validity of the e-signature, yet a new problem emerged: while an e-signature was now valid, no one was helping companies manage electronic agreements. Three years later, Docusign capitalized on this problem, and pioneered the Digital Transaction Management category which they lead today. To create their category, DocuSign created extensive resources that educate potential customers on the legality of electronic signatures across different jurisdictions and use cases. 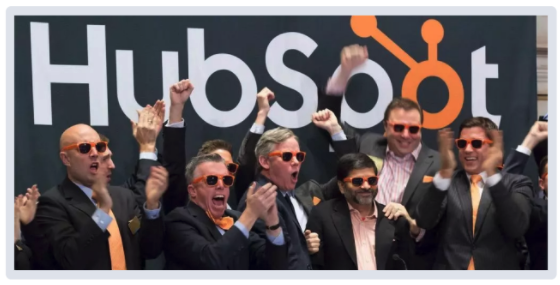 In the early days of HubSpot, the founders had a market observation: the way people were buying products was changing. Modern buyers wanted to discover products themselves, and they didn’t want to be cold called or interrupted with advertisements. So HubSpot pioneered the discipline of inbound marketing and positioned it as a must-have skill for marketers and businesses. They provided certifications, training, and in-depth strategic and tactical resources that helped people succeed at the inbound marketing discipline. They created a movement around inbound marketing and positioned their product as the go-to platform for this movement. 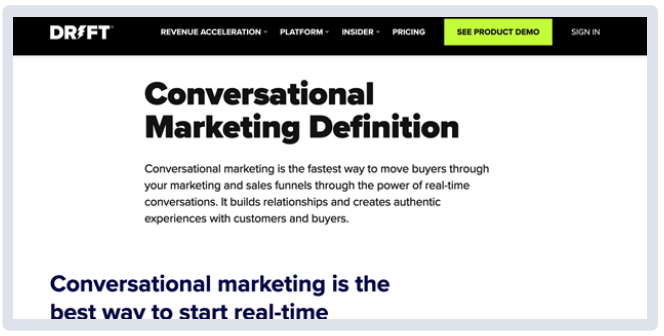 After Drift first launched, the customer support company had a hard time standing out against a sea of competitors, as the customer communications category had become largely commoditized. But the Drift team had an insight that sales and marketing teams could be a specific market segment, too — one that was not being specifically targeted. So, they made their platform all about helping sales and marketing teams to better communicate with customers and coined the conversational marketing category. In 2021, Drift was acquired by Vista Equity partners for over $1 billion. 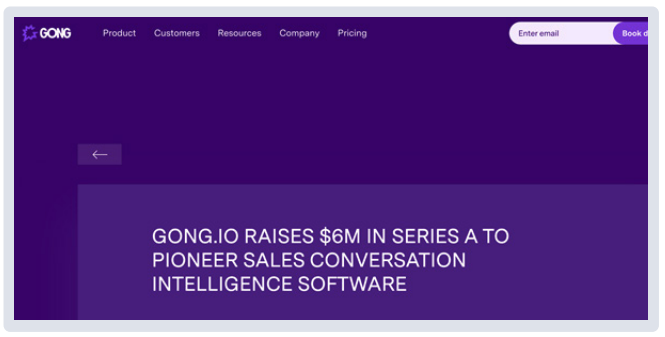 In their Series A announcement shown above, Gong’s intention to pioneer a new category of sales tool was clear. For years they published content like “These 6 Questions Will Help You Choose a Conversation Intelligence Platform” and “Conversation Intelligence: Stop Losing Winnable Deals” that educated their market around the category and, in return, positioned them as the leading advocate. After going on to dominate the category, Gong’s ambitions grew bigger. They’re now working to create and dominate the Revenue Intelligence category, which they feel has a much larger total addressable market than conversational intelligence. 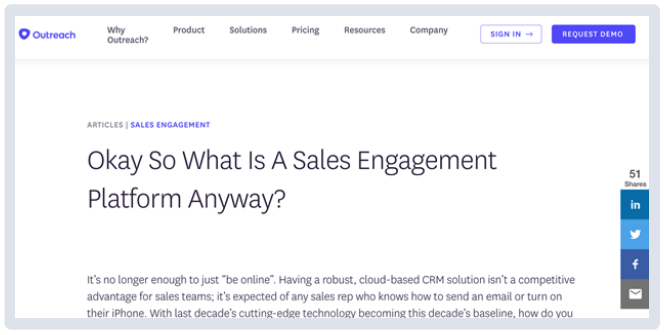 To separate their platform from all the other sales tools, Outreach is working to create the sales engagement category and have positioned themselves as the leading platform in this category. Similar to the playbook that Gainsight used, Outreach realized early on that sales professionals were an underserved community. To gain quick access, they acquired SalesHacker, the largest community of sales professionals. In the B2B Category Creators podcast, their CEO said, “The most discouraging call is a call that we had with this analyst from Gartner. For an hour he tried to convince us that sales engagement is not a category. How it’s a subcategory of sales acceleration, which is a subcategory of some other shit which is a subcategory of whatever, stop wasting my time and go to something bigger. It was such a disheartening thing.” Despite the negative feedback from analysts, it doesn’t appear to be slowing Outreach down at all and they continue to aggressively grow and push for the adoption of the sales enablement category. 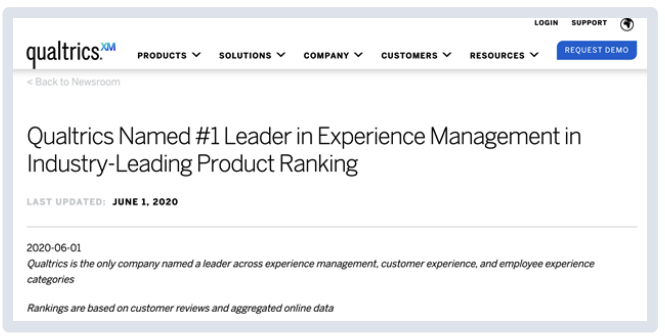 Founded in 2002, the company had a quiet first 10 years as they tried to position themselves in the crowded survey platform category. But it wasn’t until March 2017, when they officially launched the Experience Management category and positioned themselves as the leaders in it, that they began to really take off. From press releases that say things like “Qualtrics, the leader in customer experience and creator of the experience management (XM) category” to making their stock ticker symbol XM, it’s clear that their focus on the category has been very intentional. 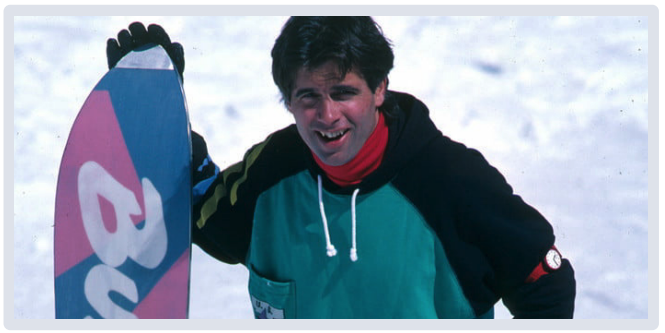 Jake Burton Carpenter is credited with developing the economic ecosystem around snowboarding as a culture, sport, and lifestyle. And as he did that, his company Burton became the premier snowboard manufacturer. As ski resorts outlawed the new sport from their slopes, Carpenter went to work lobbying them to rethink their rules. In 1985, only 5% of ski resorts permitted snowboarding, yet because of his efforts, just two years, 95% permitted it. As the industry grew, Burton actively funded snowboarding competitions and built snowboard parks with halfpipes and jumps. He also invented the binding which allowed snowboarders to make adjustments to improve their performance. 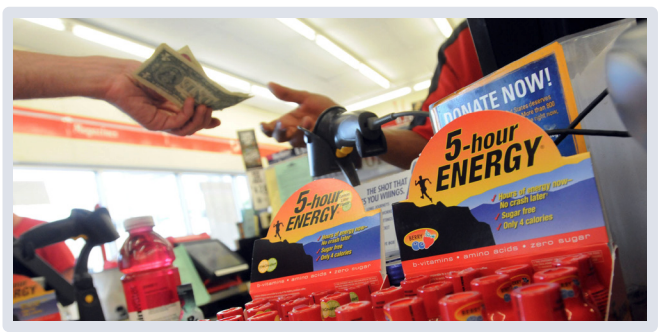 When Manoj Bhargava launched 5-hour Energy, he knew he didn’t want to compete head-to-head with the established energy drink brands like Red Bull and Monster Energy. He obsessed over his end customers’ challenges and observed that the problem they had was a lack of energy. They didn’t need a big can to solve that problem like all the energy drink companies were offering. So instead he provided customers the energy shot to solve their problem. To stand out even more, he came up with a new way to sell them. Instead of battling for limited space in the coolers all the energy drinks were in, he had 5-hour Energy shots sold at the checkout counter to capitalize on impulse buying.

From 1912 to 1915, Clarence Birdseye spent time in Newfoundland, Canada, where he learned to ice fish with the Inuit. He discovered that the fish he caught froze instantly, and still tasted fresh when thawed out. At the time, conventional freezing methods were done slowly, which damaged the tissue structure of the fish tissue and led to a mushy and dry product for the end customer. Seeing the opportunity to provide fresh frozen food, Birdseye invented flash freezing and pioneered the modern day frozen food industry. He led the charge for the entire supply chain — from frozen railroad cars to the freezers at grocery stores that would hold his products.

If you’re thinking about electric cars, who is the first company that comes to mind? For 99% of people, it will be Tesla. While Tesla didn’t invent the electric car category, they have defined it, evangelized it, and dominated it more than any other company. All the other electric car companies are now compared against Tesla — from price down to the features and capabilities of the car. In the mind of the consumer, Tesla owns the position of electric car and the more the category grows and electric cars get adopted, the deeper Tesla gets established as the category leader.

During one of his infamous product keynotes in 2008, Steve Jobs introduced the iPad. From the words he used, it’s clear that creating a new category was top of mind. He said, “The iPad creates and defines an entirely new category of devices that will connect users with their apps and content in a more intimate, intuitive and fun way than ever before.” Apple wasn’t the first to come up with an idea for a tablet-like device. Eight years earlier, Microsoft had launched their own version of a tablet which failed miserably. It failed because Microsoft didn’t set out to create a new category, they just created a new computer with a different screen. Apple had the insight that people needed a device that had more capabilities than a smartphone, but wouldn’t be as bulky and slow as a computer. They needed a device that they could browse the internet, watch movies, and consume content. Apple capitalized on this observation and pioneered the tablet market category as we know it today. 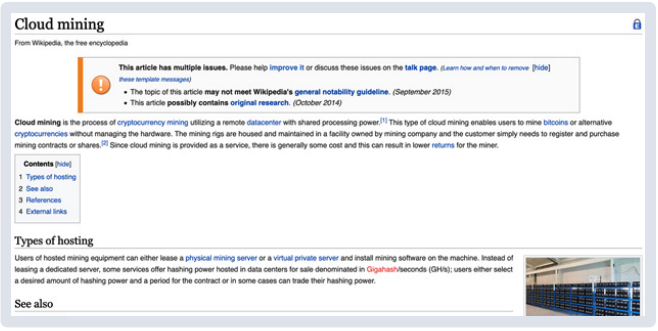 In 2014, we started working with a company that had observed a technological trend in the market: Bitcoin mining was becoming more popular, but for the average person, it was too complex and expensive to mine Bitcoin at home. Their product allowed for anyone to mine via the cloud. Together we coined the category term “cloud mining” and championed the category (their mining operations are even included in the photo on the Wikipedia page). In six years, without ever raising outside funding, they had mined over $1 billion in Bitcoin and brought over 2 million customers into the Bitcoin mining ecosystem. All the other copycat companies had to compete against the way they packaged, priced, and sold their cloud mining products. After years of dominating the cloud mining category, in 2021 they spun out a new company called Genesis Digital Assets, raised $550 million, and are now focused on owning the industrial-scale Bitcoin mining category, where instead of serving millions of customers, they simply mine Bitcoin for themselves and investors.