What Turkeys Can Teach You About Category Design

After over-ordering turkeys for Thanksgiving, the company was now stuck with a massive supply of turkeys they couldn’t sell. They loaded the excess meat onto frozen train cars and moved it back and forth across the country, burning cash as they tried to find a solution.

Management sent out an urgent notice, asking anyone in the company for a viable solution. A salesman named Gerry Thomas came up with one.

Inspired by the meals provided in the military, Thomas proposed packaging the turkey in a tray alongside a serving of vegetables and carbs, freezing it, then selling it to consumers.

Brilliant, right? Except Swanson wasn’t the first to think of this. Other food companies had developed similar pre-packaged frozen dinners before. But there were two things happening in 1953 that Swanson capitalized on.

First, many women had joined the workforce during WWII and wanted to stay in their jobs — breaking the societal norm of the housewife who takes care of the house while the men work.  Second, a new technology was emerging that would transform household entertainment: the television. In 1950, just 9% of households had TVs. By 1954, that number had increased to 56%. 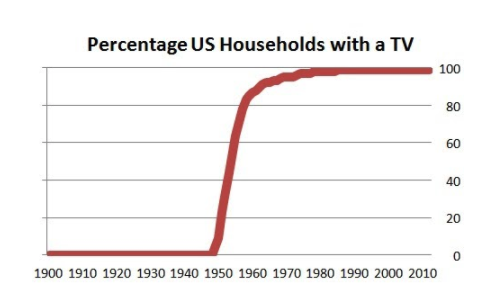 Swanson brilliantly connected the dots between these two trends that others hadn’t. If both the husband and wife were now working all day, that created the need for a quick and easy way for their family to eat dinner. And with the rise of household televisions, these families were spending more and more time in their living rooms.

So Swanson designed their product around an emerging problem that no other company was positioning to solve: what do you eat while sitting in front of your TV in your living room after both parents have just come home from a long day’s work?

These observations led to Swanson inventing the TV dinner. They took their innovative idea, aligned that idea with a societal trend (women in the workforce) and a technological trend (rise of TVs) to pave the way for the TV dinner category which continues to generate over $4.5 billion in annual sales to this day.

They capitalized on these two trends and marketed their product as the solution to a new problem.  The product was a massive success and went on to sell over 10 million in the first year (while also solving that 520,000 pound Turkey problem!). Swanson didn’t try to play by the rules other turkey companies were playing by. They didn’t market their turkey as BETTER or CHEAPER than their competitor’s turkey. Instead, they marketed their turkey as totally DIFFERENT and completely separated their product from all the other turkey sellers.

They designed and dominated the TV dinner market category, generating billions of dollars in sales in the process. This is the path that many of the greatest companies in the world have followed. Instead of just trying to win with better, they win with different. Instead of fighting in an existing category full of competition, they create their own category in which they can establish a dominant position.

The world doesn’t need more “me too” products with slightly better features and capabilities. The world needs more bold visionary founders willing to step up and create new categories that solve new problems people are experiencing for the first time (like needing quick easy dinners after both parents finish work) and solve old problems in totally new ways (like Uber solving the problem of getting you from point A to point B in a new way).

While creating a category isn’t easy — it can be worth it. The companies that create new categories are the ones who are remembered as visionaries, changemakers, and revolutionaries. They transform their industry and create exponentially more value for their investors, employees, and customers. There’s never been a better time in history to be a founder that creates new market categories. This is the era of the category creator.